Why did the WSJ use years-old data to attack Social Security disability?

“A system designed to serve society’s vulnerable has morphed into a benefit bonanza that costs taxpayers billions of dollars more than it should,” write the authors, Mark J. Warshawsky, a visiting scholar at the Mercatus Center of Virginia’s George Mason University and former member of the Social Security Advisory Board, and Ross A. Marchand, a George Mason grad student.

Their focus is on appeals granted by the program’s administrative law judges, who have the power to reverse denials of disability benefits. Their chief concern is that too many judges are approving too many appeals.

“In 2008 judges on average approved about 70% of claims before them, according to the Social Security Administration,” they write. “Nine percent of judges approved more than 90% of benefit requests that landed on their desks.” If all the judges who approved 90% or more of appeals before them were removed, they calculate, the taxpayers would be relieved of paying 98,000 disability cases costing an average $250,000 each. The authors say that’s a savings of $23 billion. (The math actually works out to $24.5 billion.)

Followers of disability politics will see this op-ed as the latest in a lengthening stream of attacks on Social Security disability, which is facing a near-term funding crisis that Congress is loath to address. Warshawsky and Marchand mention the disability program’s looming fiscal shortfall, which could force cuts in disability payments of about 20% as early as 2016. “Congress would be wise to begin much needed reform,” they say, and they suggest starting with these overgenerous judges.

So it’s proper to give their datand conclusions a close look. Warshawsky declined to answer my questions about the piece on the record, but referred me to a lengthier treatment he published in Bloomberg’s Pension & Benefits Daily in 2012.

First question: Why did Warshawsky and Marchand use case figures from 2008? It can’t be because those are the latest figures available–decision data for individual judges is available at least through the end of 2014. Social Security’s own inspector general’s office compiled the data through fiscal 2013 for a report issued last July. What the office found is that the average approval rate has been coming down for years–reaching 56% in fiscal 2013.

Warshawsky and Marchand even allude to this trend in their piece; they observe that reforms implemented by former Social Security Commissioner Michael As true have reduced the number of cases heard by supposedly overly generous judges. Their concerns about whether the trend will continue are entirely conjectural: “These changes can easily be undone, either intentionally by future administrators, or unintentionally as bad habits slip back into the system.” So far, that hasn’t happened, and there’s no evidence that it’s likely to.

In his 2012 piece, Warshawsky tracked ALJ denial rates from 2005 to 2011, and determined that even by 2011 ALJs on average had become significantly stingier. That only makes it harder to explain why the outdated 2008 figure became the linchpin of Monday’s op-ed–as well as its headline (“Disability Claim Denied? Find the Right Judge”) or subhead.

Warshawsky and Marchand assert that the disability program faces a “huge backlog,” which is true; the average wait time for a hearing is a scandalous 12.8 months. They say one reason for the backlog is claimants who play “adjudication roulette, filing and then withdrawing appeals in hopes of drawing a generous judge.” For that assertion the authors provide absolutely no evidence.

Warshawsky’s 2012 article asserts that disability lawyers may be “gaming the system,” sometimes by dropping cases that look like losers, presumably to refile them before a different judge. But he offers no statistics on how many of those cases get refiled. 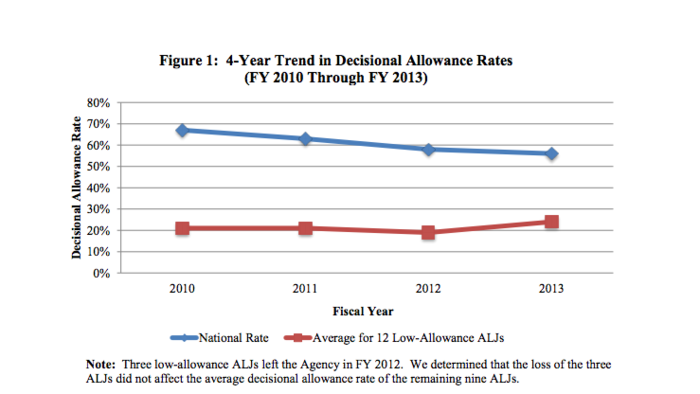 Tim Moore, a former disability claims examiner in North Carolina who runs a disability information website at SSDRC.com, suggests that’s because such evidence may not exist. Adjudication roulette is “probably so statistically insignificant an occurrence that it amounts to pure conjecture on the part of the WSJ writers,” he told me by email. Claimants without lawyers or other professional help “would not even know how to do this,” he says, and no one who represents claimants for a living would want to acquire a reputation for the practice. Moreover, Moore says, it’s almost impossible to predict how any given judge will rule on any case.

The inspector general’s report implicitly questions whether administrative law judges’ gross approval and denial rates are fair analytical tools. Variances in approval rates are due to many factors, the report says, including “the demographics of claimants served by the hearing office, such as their age, education, and available work.”
Indeed, ALJ approval rates vary widely by state, ranging from 16% in Alaska to 65% in Puerto Rico, according to the website DisabilityJudges.com, which compiles Social Security Administration datand says it’s current up to Feb. 12. Its latest national average for ALJ decisions shows 44% approved, 38% denied, and 18% dismissed. That’s not surprising, because disability rates themselves vary widely, often tied to the economy and the makeup of the state’s industries: for example, in West Virginia, 8.9% of all workers aged 18 to 64 were on disability in 2013, but in California the rate was only 3.2%, according to an analysis by the Center on Budget and Policy Priorities.

The OIG’s report aimed to scrutinize judges whose approval rates were inordinately low, not high–a concern not mentioned by the Wall Street Journal’s op-ed writers. That raises another question: why not balance the examination of ostensible over approvals with a look at judges who may be depriving worthy recipients of benefits, instead of merely assuming that appellants are undeserving unless proven otherwise?

What the inspector general found was that ALJs with unusually low rates of approval also had above-average rates of remands and reversals when their rulings were appealed to the agency’s appeals council.

Put it all together, and what you get is an op-ed that appears to be based on statistics but whose import is political. Its implicit theme seems to be that disability appeals are suspect by nature, and judges who approve more than the average must be up to no good. As we’ve written before, this is a variation on ancient conservative attacks on the “undeserving poor.”

Disability benefits, in truth, are hard to get; only about 40% of applicants end up with payments, even after all appeals are exhausted. Wait times are long, and the average benefit of $1,165 per month is not lavish (recipients are permitted to earn another $1,070 or so without losing their benefit). Disability applications have started to decline, largely because the demographic and economic drivers of the rise in disability claims since about 2008 have already peaked.

Warshawsky and Marchand are right to observe that the disability appeals system needed to be made more efficient and fair, and that such changes are being implemented. But calling it “a benefit bonanza”? No one thrown out of work by a disability and living on $1,165 month after meeting the program’s stringent approval standards would define it that way.